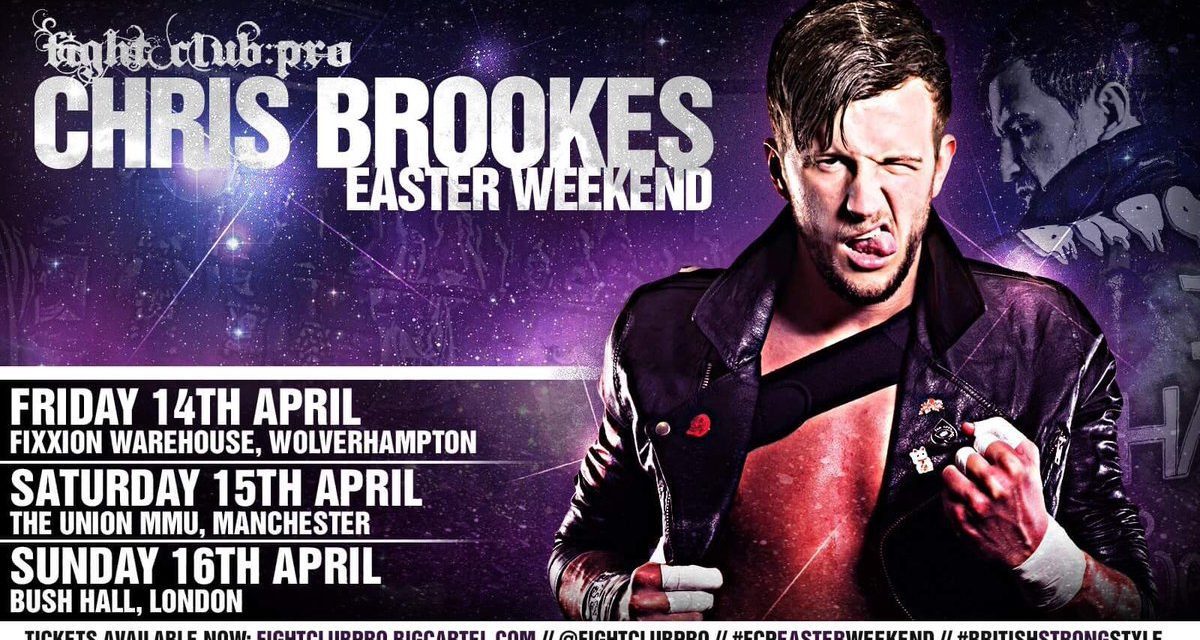 FCP made their full debut in London for the last leg of the Dream Tag Team Invitational. After a frenetic first two days, the tournament was down to a unique final four of #CCK (Chris Brookes & Mondai Lykos), the Hunter Brothers, the Lucha Brothers (Penta & Fenix) and FSU (Mark Andrews & Eddie Dennis).

This match was a result of the aftermath of the Night 2 main event where, after their team of the Bruisercats was eliminated from the tournament, Dunne turned on Callihan. With that logic you might assume this was some sort of hard hitting grudge match, but for the most part it was played for commentary and at minimum was consistently lighthearted. British Strong Style came out to Triple H’s ‘My Time’ theme and all did the spitting water pose during their entrances, which set the tone. Lots of low blows, lots of references, lots of crowd interaction. This was just these six guys having fun, and it was a breeze to watch. A good way to open up the show, especially for the live crowd, but nothing overly memorable. ***1/4

This was a fairly basic but overall good encounter pitting Tipton’s (does it exist?) finest against each other. Neither of these teams seemed to really grab this match and drive it, and it definitely felt as if #CCK were holding back for the final. What it did do a good job of was establishing #CCK ‘s signature offense ahead of the main event for the new London crowd. ***1/4

This match never clicked for me, the two teams never quite seemed on the same page; the match never really had any flow to it. It wasn’t actively bad or anything, there were certainly fun stretches, but after the early portions that were played for comedy most of this match was just there and then dragged down further by poor tag legalities. ***

First half didn’t grab me at all, which has unfortunately become a pattern for Zack Sabre Jr. singles matches, especially the ones he has in the UK. They frequently feel meandering and purposeless with the occasionally flashy little technical thing to stop the viewers completely fall to sleep; it’s no coincidence that crowds are frequently dead for the middle portions of his matches. He didn’t set anything up in his early offense here that would pay off later, he was just dominating without any real consequence.

When Travis finally made his comeback things picked up significantly; once this match became a more traditional back and forth it improved tenfold. Banks brought the intensity and Sabre held his own once the match had been kicked into a higher gear, and we ended up with half a boring match and half a great match. ***1/2

Looking at this card there was no way I expected this seemingly thrown together three way to be the pick of the bunch, but I’ll be damned if it didn’t end up being match of the night. It built brilliantly to a crescendo, escalating wonderfully throughout the whole course, and all three guys came out looking great. There was one spot in particular that bears mentioning, which saw Strickland hit a corner dropkick that looked so nasty I’m sure I saw Haskins’ soul vacate his body there live. ***3/4

Half comedy matches that end up in dance offs have been all the rage in BritWres recently, especially in matches that involved Will Ospreay. The sheer amount of them has driven most of the joy out of he archetype for me, but it doesn’t help that so many of them feel forced and in general not particularly well done. This particular version of that type of match may be the best way I’ve ever seen it done. Evans kicked things off by running down Vicky Haskins who was on ring announcing duties, then cutting a promo talking about how he was the innovator of high flying and all these new high flyers were nothing to him. This then brought out Ospreay, and they had a very good match with a lighthearted nature, in which Evans had a gripe with the ref. This lead to Evans bullying the ref, which then logically transitioned into the unlikely occurrence which say Shay run wild for a little bit before ultimately getting cut off by Evans. Then just as Evans was set to lay a beating on Shay, Ospreay hit him with the OsCutter and picked up the win. Then, after the match, Evans grabbed the mic and told Ospreay that the match wasn’t what matters, anybody that watches indie wrestling knows that the dance off was where it’s at.

It all just flowed so naturally and never felt forced, and was just a hell of a time. So much of the time I hate it when we get these type of matches, but I thought this one nailed it. ***1/2

There’s a lot to like about this match (the result included) and I really wanted to love it. It was well on its way towards great territory too. #CCK did a far better job of sticking to the correct tag legalities than Penta and Fenix’s prior opponents FSU (which gives logic to the heat segment) and both teams did an excellent job of making this a flowing match with a big time feel worthy of the final of a major tournament. #CCK are so innovative in their tag team offense and, while there was a spot or two which were a little sloppy, overall Lykos and Brookes very much looked like they belonged in there with the Lucha Brothers.

The one thing that stopped me classifying this as great was that I didn’t like the finish. Lykos took a Canadian destroyer on the apron (the hardest part of the ring!), then was rolled into the ring and immediately took a package piledriver. Not only did he kick out of that, which I would have been fine with if he’d have sold it like death afterwards, but he was back up on his feet delivering offense fifteen seconds later. The problem wolf would hit a big dive to the outside, then #CCK would hit their Gory Blockbuster finish to become the inaugural Dream Tag Team Invitational winners. ***3/4

It may be a somewhat unpopular opinion, but I thought this was a consistent but unspectacular show. For the most part it was a very well wrestled show that was a fun watch, but I can’t say I came away thinking anything was must-see. What did aide the show though was how well booked it was. Having the (fairly) home-grown up-and-comers in #CCK being the ones to triumph out of such a star studded was absolutely the right move both for the live crowd and the general narrative of the company.