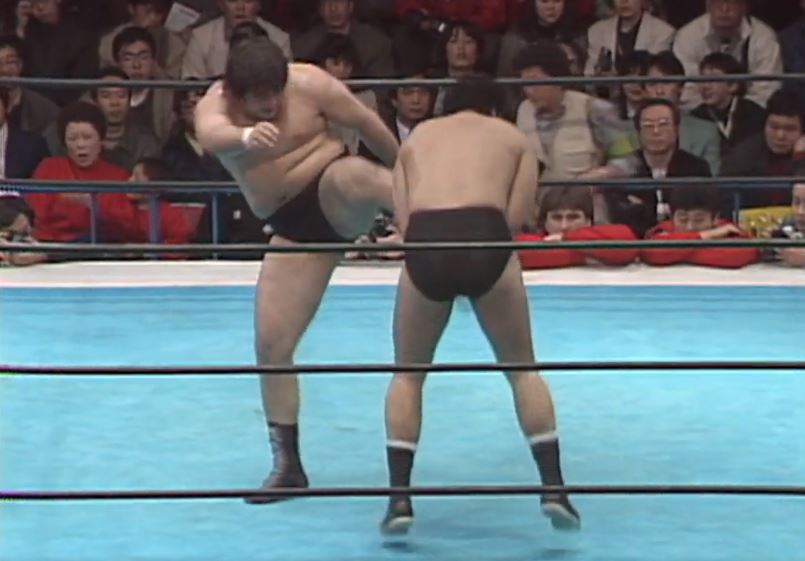 Greetings fellow wrestling fans and welcome back for another edition of The Lion’s Vault, your favorite column dedicated to taking trips down memory lane through our friends at NJPW World to enjoy matches of New Japan’s yesteryears. This week we approach the finishing stretch of our Liger retirement matches countdown as we watch him defend the J-Crown title against a young Shinjiro Otani, and then for something a little different than what we have previously featured, we will look back at a young lion match as Masahiro Chono battles Shinya Hashimoto in the finals of the 1987 Young Lion Cup. And as always, remember that you can follow along with all of our match reviews and our column based curated playlists through our Guide to the Lion’s Vault. 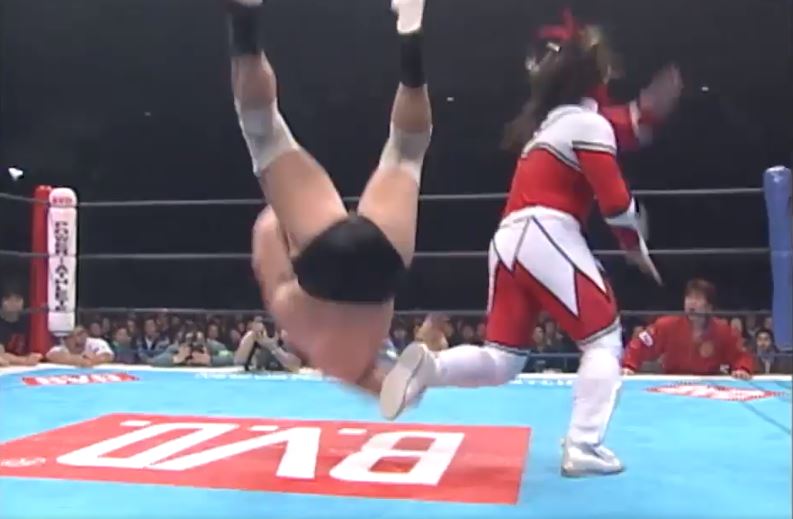 Spoiler Free Teaser: Liger and Otani continue their 1990s rivalry as they compete for Liger’s J-Crown championship. The result is an epic encounter between the two that feels closer in structure to a New Japan 1990s heavyweight main event than a typical junior heavyweight battle, and involves a memorable and emotional ending as both wrestlers leave it all in the ring. ****¼

As we near the end of Jushin Thunder Liger’s thirty-five-year career and reflect on his role in the world of professional wrestling there are certain names that come up over and over again in connection with him. One of the most prominent and closely linked of all those names is that of Shinjiro Otani, who before being by deemphasized by Riki Choshu and then leaving with Shinya Hashimoto to form Zero 1, was seen by many as the wrestler who would prove himself to be worthy of being Liger’s long-term rival. The two feuded on and off throughout the 1990s with Otani as the young and emotional upstart who seemed to believe that it was his destiny to not just defeat Liger, but to become the unquestioned face of NJPW’s junior heavyweight division. But coming into this match Liger led their all-time series nine matches to one, and while Otani had that one win, he was still searching for that big-time victory that would elevate him beyond Liger in the fan’s eyes. Wrestling Liger for the J-Crown Championship (a championship which was formed by the unification of eight junior heavyweight titles in 1996 and was dissolved in late 1997) definitely gave Otani the opportunity that he was looking for, and the only question was would he finally earn the victory that he had been desperately seeking.

We begin with a handshake and a very heated collar and elbow tie-up that sets the mood for the first half of the match, which involves a lot of intense and nasty looking grappling between the two competitors. Both wrestlers choose to focus a significant portion of their offense on an opponent’s limb, with Liger dissecting Otani’s left leg and Otani returning the favor on Liger’s left arm. The extended limb work not only does a good job of providing a narrative thread for all the mat work, but also serves as a strategic tool for both wrestlers as they try to reduce the effectiveness of key parts of each other’s arsenals…in this case Liger’s strikes and in particular the Shotei, and Otani’s kicks and springboard offense.

After about fifteen minutes of grappling and strikes the action spills to the outside and the match hits a second gear that it never looks back from as Liger powerbombs Otani on the ringside floor…and somehow seconds later Otani delivers his own short powerbomb on the floor before rolling Liger back into the ring. Showing their familiarity with each other both men are able to reverse big moves for close near falls as first Liger dodges the springboard dropkick and catches Otani in a la magistral, and then Otani rolls through a top rope frankensteiner. With that we are officially off to the races and both wrestlers begin trading big bombs, and in trademark fashion, Otani begins to wear his emotions on his sleeve with every big move and pinfall attempt…which comes off as either great or over the top depending on your perspective.

The bombs continue from both men, including several spots that could serve as a believable finish, until the two end up battling it out on the top turnbuckle. Liger seems to have gained the advantage with a series of headbutts that send Otani crashing to the mat multiple times, but Otani charges in one last time, nails his own series of headbutts, and takes Liger down with his own top rope frankensteiner. Otani sensing that his moment has finally arrived, waits for Liger to get back to his feet, and then catches him with a springboard spin wheel kick…that only gets two to Otani’s disbelief. In seeming desperation Otani cover Liger three more times, but Liger continues to kick out to Otani’s mounting frustration. As Otani stands up his frustration from seconds ago seems replaced with anger that Liger won’t stay down, and as he goes for a Dragon Suplex Liger is able to escape and catch him with a palm strike, at which point Otani screams at Liger to hit him again while bracing for another blow. Liger is more than happy to oblige, and what follows is a series of strikes from Liger with Otani defiantly trying to weather the storm. Unfortunately this angry defiance proves to be Otani’s undoing as soon enough his legs go rubbery, at which point Liger bounces off the ropes and lands a ferocious Shotei for the pin.

Match Rating ****¼ – Fantastic match with just an unbelievable closing couple of minutes. Otani truly came off as Liger’s equal throughout the half-hour battle, and ultimately it was more his own emotions that cost him the match than anything else. In addition to the brilliant ending, the opening extended matwork was a delight as both wrestlers were focused and creative enough to keep your attention, and Otani’s work, in particular, had a nasty edge to it that is often missing in these type of exchanges. Yet despite all this awesome work, for my viewing tastes the match had a couple of issues that prevented me from rating any higher…primarily how the effects of the extended mat work seemed to be completely dropped by both wrestlers after the first half of the match, along with a feeling at times that the match was falling into a simple my turn/your turn pattern without transitions or struggle (perhaps most notable in the previously mentioned powerbomb spots). Still, this is a great match that I would recommend to anyone, and if you aren’t bothered by the couple of items that I critiqued it could easily be viewed as a five-star match. 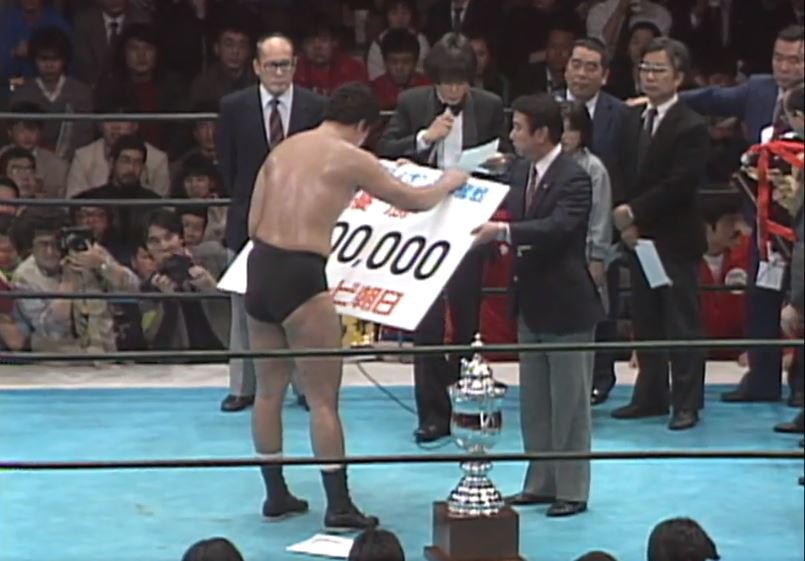 Spoiler Free Teaser: In a battle of future members of the “Three Musketeers,” Masahiro Chono and Shinya Hashimoto face-off in the finals of the 1987 Young Lion Cup. The match has the same timeless vibe to it that most good NJPW young lion matches have, with a focus on execution and in-ring storytelling, but is elevated as it progresses by one of the two competitors stepping up to the plate and showing the aura and ring work that made him a future superstar. ***¼

Here we are at the finals of New Japan’s 1987 Young Lion Cup, and based on the future careers of Hashimoto and Chono I think it is safe to say they made a good pick in having these two as our finalists. By the end of the year, both these men will have left on excursion, so in effect, this match represents a high watermark for the first stage of the wrestling careers.

Being a young lion match the action begins in a largely predictable, though entertaining fashion, with lots of smooth, mat-based chain wrestling. Even in these early portions, Hashimoto seems to have a presence that most young lions have not yet developed, which is pretty damn impressive since he also happens to look a bit like an oversized toddler in the traditional young lion black shorts. On the other hand Chono looks really smooth in the ring, but from my perspective is not projecting any of the cocky/cool charisma that became a major part of his character work down the line. Watching this I really am amazed that the general paces of young lions matches have stayed relatively the same over the years, which really says something about the intentionality and strategy of the NJPW dojo’s training program.

As the match progresses the intensity seems to ratchet up a little, as the smooth mat work now appears to be more of a struggle between the wrestlers (in a good way). And almost on cue that increased intensity leads to an extended strike exchange that leaves both men collapsing to the mat struggling for a second wind. The match’s last act is largely based on Chono trying to outwrestle Hashimoto with suplexes and various crab holds, while Hashimoto simply decides to kick the shit of Chono while looking like a badass. Sure he mixes in some other nice spots, like a beautiful snap belly-to-belly suplex, but at no time in this match does Hash look like a bigger star than when he closes down the space between Chono to saw him down with a series of kicks. The crowd is really into the action this point, and Chono is getting in just enough offense to keep things honest…and then just as Hash looks like he is going to finish things off Chono is able to cradle him into a small package for the flash pin for the upset and the tournament victory! Post-match Hashimoto is visibly frustrated, knowing he let the match slip through his fingers while Chono looks simply exhausted as he collects his various trophies and an oversized check. Finally, the two men shake hands, and then Tatsumi Fujinami (who refereed the match) raises both their arms for the fans.

Match Review ***¼ – So even by young lion standards I thought this started a little slow, but luckily it really picked up and the second half legitimately felt great. Chono was definitely solid throughout the match, and looked good for this early stage in his career, but without a doubt, Hashimoto came off as the star of the match. It really is amazing how much he seemed to have figured out even prior to leaving for excursion, and he was already just a few small tweaks away from being positioned for his eventual ascent to the top of the heavyweight division. Consequently, while this match falls outside of the top tier of what is on NJPW World, it is still a must-watch if you are a fan of Hashimoto or if you want to dive more extensively into the Three Musketeers era of New Japan.

Thanks again everyone for joining us for another chapter of The Lion’s Vault. As we move forward we will continue our focus on Liger as we look to wrap up our tribute prior to his Wrestle Kingdom retirement matches, while continuing to sprinkle in other fun matches as we can. Until the next time, peace and happy wrestling watching to you all! 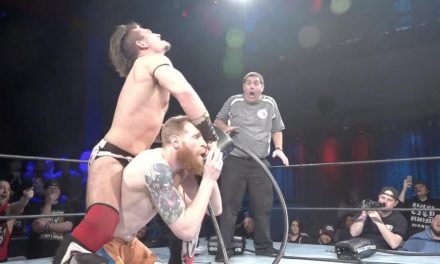 5 Awesome WrestleMania Weekend 2019 Matches You May Have Missed

Young Man Yells At A Cloud: Impact Wrestling’s Use Of Disco Inferno