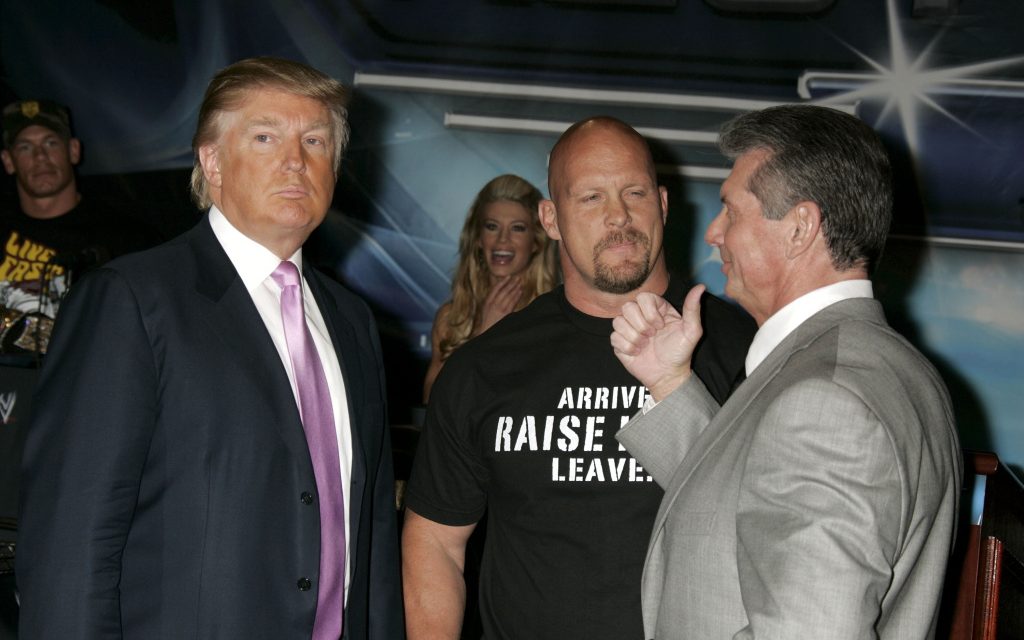 There have been a lot of columns and think pieces comparing Donald Trump’s 2016 campaign and presidency as a version of pro wrestling, which is especially apt since he is an important part of WWE lore. His hotel in Atlantic City hosted WrestleMania IV and WrestleMania V, there was the famous and profitable Battle of the Billionaires at WrestleMania 23, and he is a member of the celebrity wing of the WWE Hall of Fame. But there is a deeper connection between Trump and the Mcmahons that goes beyond business partners, and that is the subject of Lavie Margolin’s TrumpMania.

This book is a thorough examination of the connections between Trump and the McMahons. It goes from the hosting of WrestleMania IV up to the present pandemic days. You can see how the friendship of Donald Trump and Vince McMahon developed outside of the pro wrestling business and the effects. An example of this that wrestling fans know is that Linda McMahon was part of Donald Trump’s administration and there is a history of donations from them to Trump’s political campaign. There is also a connection between part of WWE programming and the current U.S. political situation. TrumpMania shows you the dots and it’s up to you to connect them and see if you agree on the assessment that Trump stint in WWE was influential in his political aspirations.

Margolin is very thorough in his research, even up to the point where he mentions the wrestlers’ real names at times, which was a little jarring reading along. The level of research is incredible, where you not only get the real numbers of the WrestleMania’s and what happened to some of Trump’s investments and personal life, but there are side stories that are just as interesting as the main thesis. One of my favorite parts of this book is the detailed account of Linda McMahon’s failed Senatorial race in Connecticut. This is an area where Margolin even went up to the local newspaper to see how the race went and the discourse. Another interesting thing I learned about is the history of the “Smackdown Your Vote” campaign. Did you know that The Rock was part of the RNC in 2000? And that WWF/E was responsible for thousands of newly registered voters?

TrumpMania offers a comparison of Donald Trump and Vince McMahon that is on point. They are sons of successful fathers, both participating in their father’s business model, both of them see themselves as successful by their own accord, and they even have a history of failed businesses outside of their main area. With the research, I could see that the friendship of McMahon and Trump is of mutual admiration due to what they considered their similarities, age, and vision of wealth. Both are men that aren’t afraid to exaggerate all things concerning them. Also, they benefited a lot from each other.

Trump brought WrestleMania to his hotel in Atlantic City to attract a middle-class gambler to his casinos, and the WWF got the glitz and glamour of being there. Due to the WrestleMania shows in Atlantic City, Trump met Jesse Ventura and had a meeting with him after he won the governorship in Minnesota to see how he did it. Vince was responsible for a huge payday for Trump at WrestleMania 23, which in turn helped his show “The Apprentice.” Vince was constantly increasing the real status of Trump by calling him a billionaire, and by comparing himself to him, increasing himself by association. Vince added him to his Hall of Fame, even though fans hated it live. And finally, Trump donated money to Linda’s campaign, and McMahon reciprocated by donating to his campaign.

Does not matter what side of the political aisle you are, I think that this book is an important read for wrestling fans. Sometimes we are inside this bubble and people don’t take the effects of pro wrestling on culture seriously. This is an example on how there are indeed friendship connections between the current U.S. administration and the WWE. You can argue that what is happening with the Coronavirus situation, the firings of employees during a pandemic, they being deemed an “essential business” during said pandemic, the lack of regulations, the “independent contractors” topic, and the partnership with Saudi Arabia as just wrestling flying under the radar. Sure, wrestling is flying under the radar due to the misconceptions, but it is not a coincidence that it goes in line with some of the values of the current administration.

TrumpMania is a great and important read for wrestling fans or anyone interested in politics. It’s a fascinating read from beginning to end, especially if you never lived through some of the moments described. Does not matter if you are from the right or left, Donald Trump and Vince McMahon are important figures in entertainment and politics and are cases that should be studied.

VOW Book Review: The Eighth Wonder of the World – The True Story of Andre the Giant

VOW Book Review: Crazy Like a Fox – The Definitive Chronicle of Brian Pillman