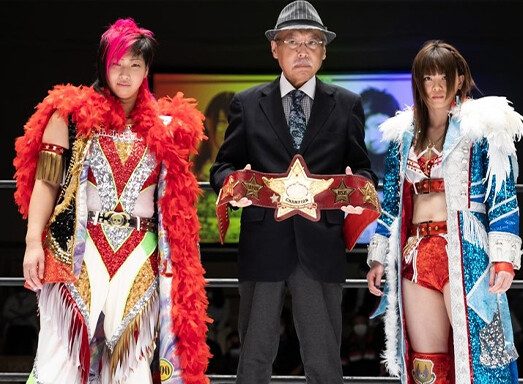 Stardom returns to Korakuen Hall for a top-heavy show featuring the highly anticipated rematch between Takumi Iroha and Mayu Iwatani.  We also have an all Queen’s Quest matchup in Goddess of Stardom action that promises to be a good matchup.  The show will be reliant on those two matches to perform as Stardom continues to downscale their Korakuen Hall shows to B-shows as they become more and more ambitious by running bigger venus.

This was a standard opener that was made better by the presence of Riho and Death.  Everyone else was good too but Death, in particular, has been quite entertaining in her current gimmick and helped keep my interest in this match. Death pinned Hanan to get the win, I thought Riho’s team would win but Death is on a roll lately and she kept that going here. **1/2

This was fine.  Nakano was put in here with someone she could beat to continue rehabbing her momentum after the loss to Giulia.  Iida did give Nakano a good fight though and continues to be one of the better underdogs in Stardom. **1/2

Himeka gets a solid tune-up win ahead of her Wonder Of Stardom title shot at the next Korakuen.  Shirakawa almost got too much offense in this one given Himeka is well pushed and Shirakawa has mostly taken pins since her Stardom debut at Yokohama Cinderella.  Still, solid enough. **1/2

Stardom met their one draw per show quota with this faction vs faction matchup.  At the very least we seem to have moved on from Oedo Tai getting disqualified in every match which is beneficial for the group as a whole as they finally have some momentum coming out of Yokohama Cinderella.  The result also made sense because after the match Tora challenged DDM to an Artist of Stardom title match and since all of DDM is protected these days this was the best way to get to an Oedo Tai title challenge.  The match itself was nothing special, I wanted to like it but at points it was sloppy and the finishing stretch was unimpressive. ***1/4

These two teams have a better match in them and it looks like we may see them go at it soon enough as MOMOAZ are in a strong position to win their block.  The team of Kamitani and Hayashishita have never beaten AZM and Watanabe despite wrestling them twice this year (the first match went to a draw) so the loss here gives them a mountain to climb when these teams meet for the third time.  ***1/2

The biggest question going into this one was if these two could live up to their Match Of The Year contender from February.  For me, they exceeded their first match here.  The first match was Iroha dominance but this match allowed sadist Mayu to come out and play and that made all the difference.  This was much more back and forth with Iwatani digging deep to pull out the deserved win by the skin of her teeth.

The match-winning pinfall may be contested by Iroha who had her leg kicking the bottom rope when the three was counted so Iroha may have a claim to another championship match down the line.  For now, Iwatani sets her sights on Utami Hayashishita who challenged her after the match.  Stardom has done a great job of building Iwatani up as the almost unbeatable ace of Stardom who now faces the future ace Hayashishita in a match that could crown Hayashishita as the new torchbearer of Stardom.  I’m not going the full five on this one, I strongly considered it, but I can see many people handing this match 5+ stars. ****3/4

This show desperately needed the main event to knock it out of the park and Iroha and Iwatani delivered with my Match of the Year.  Outside of the main event, nothing on this show was essential viewing  Stardom has learned that they can do strong Korakuen numbers with one title match instead of the stacked Korkauens we used to get and that’s showed in the quality of the cards for their past few trips to Korakuen.  That said, the main event did its job and not only drew a good number but also kept this from being a completely skippable show.